7 smart home trends to watch in the next year

People already have a plethora of smart home devices to consider putting in their abodes, but manufacturers know there’s a demand for new and improved offerings.

Numerous trends should become apparent in the smart home marketplace over the next year. Here are seven smart home trends we think you need to keep an eye on.

For now, most of the smart home gadgets people own are accessories like speakers and cameras. However, analysts think it won’t be long before it’s common to see entire pieces of furniture with intelligent capabilities. In fact, several companies in the United Kingdom offer choices such as tables with wireless phone chargers built into them and sofas with integrated speakers. Others have hidden compartments for Apple products and apps that make the devices work.

Smart locks have already become relatively commonplace in homes and on people’s front doors. However, smart locks do not work on garage doors, which is arguably one of the most-used entrances by homeowners.

Never fear, new tech is making basic garage door openers a thing of the past. You might be surprised to know that smart garage controls have been around since 2014, yet they’ve only recently begun to gain notice from consumers.

MyQ is one example of smart garage door tech that lets you check the status of, open or close your garage door from your smartphone. No more doubling back on your way to work to see if you remembered to close it. 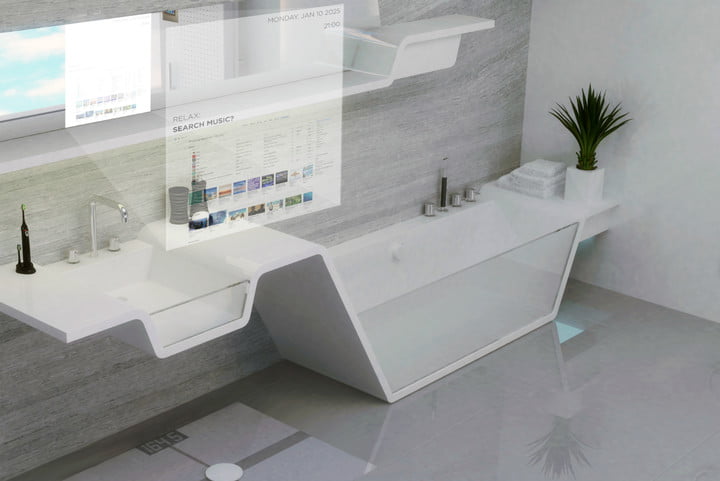 There are smart gadgets for the kitchen and bedroom, and manufacturers don’t want to overlook the bathroom. It’s the place where many people get their days started after getting out of bed, and the gadgets on the horizon seem set to put them in good moods.

One of the primary companies moving into the smart bathroom space is Kohler, with its Kohler Konnect line. Most of the gadgets respond to Alexa commands to make them exceptionally user-friendly.

A smart shower sets the desired temperature and amount of steam, plus even customizes lights and music. Then, there’s a voice-activated lighted mirror that makes it easier to apply makeup or shave facial hair. Similarly, Moen offers a smart shower, and analysts suggest some of the toilets of the future could have health-analyzing capabilities, such as the ability to tell if someone’s pregnant.

A survey of 1,000 American adults found the top smart home priority for those in the highest income bracket was security. However, it’s likely that there will be an increasing interest in home security gadgets from people of other income levels too, especially due to plans for a growing variety of options.

Companies are building cameras with AI chips that make sense of what they see, and the Eufy EverCam is a wireless camera with a 100-decibel alarm and year-long battery life.

If that happens, people will find it’s easier than they expected to invest in advanced security gadgets when they already own and love Alexa-powered speakers.

Property managers typically entice prospective tenants by highlighting how their apartment complexes have onsite swimming pools and gyms, and may even give people gifts like cameras or iPads.

However, a study found they might get better results by fitting the accommodations with smart devices, since renters prefer that technology over traditional amenities.

Among the most desirable features were ceiling-mounted surveillance cameras, intelligent thermostats and keyless entry systems.

The survey also discovered respondents weren’t loyal to specific smart home brands, which gives property managers more freedom when choosing gadgets for their units. Plus, 47 percent of the people polled say they’d be willing to pay at least $20 more per month if their apartments had smart technology.

Before that happens, though, people will see gadgets that don’t require using smartphone apps or electronic interfaces to control them.

One company called Z-Wave hopes to make that happen through sensors that turn any gadget — whether it’s old or new — into a smart home compatible option. Representatives from Z-Wave say sensor-equipped items will talk to each other, and that the sensors will have integrated batteries.

People are already familiar with wearables that track their sleeping habits and the number of steps they take, and it’s likely they’ll soon be able to use wearables to control things in their smart homes. A company called Titanium Falcon is taking pre-orders for its Talon smart ring.

Details about the product promise it integrates with “virtually any application or device,” ranging from smart TVs to tablets. A person wearing the Talon will use gestures to interact with technology, but the ring also has built-in buttons.

Outside of dedicated wearables that control smart home devices, people can expect the wearables they already own to interact with smart tech. Recently, smart-lock company August unveiled an app that lets people secure their homes with their Apple Watches.

This list demonstrates the smart home market is still going strong, and there are plenty of innovations to explore. Thanks to these gadgets, the high-tech homes people dreamed about while reading science-fiction novels are here.