When it comes to protecting your computer from nasty malware and hackers, there are a lot of options out there. Solutions such as firewalls (both hardware and software), anti-virus, and anti-malware software all exist in the security space to help keep you and your devices safe. Today I’m going to be reviewing Bitdefender Antivirus for Mac.

We’ve looked at Bitdefender products in the past, including the Bitdefender Box as well as Bitdefender Internet Security 2019 and have been impressed. The company, which has been around now for 17 years has developed an excellent reputation in the antivirus community with its products earning several awards over the years. So without further ado, let’s take a look a look at Bitdefender’s latest security offering for Mac.

The brand new Bitdefender Antivirus for Mac offers a wide range of features, including improvements to its ability to protect your computer from baddies (malware, viruses, trojans, ransomware, etc). In fact, Bitdefender Antivirus for Mac (BAM) has made marked improvements to the way the program will protect you and your files from ransomware by introducing a better data-protection layer that safeguards your documents, pictures, videos, and music against any kind of ransomware attack. Additionally, BAM will protect Mac users’ Time Machine backups as well in an effort to make it easier to restore without having to pay a ransom in the event of a ransomware infection. In our tests, we found it worked very well in conjunction with the Bitdefender Shield module and protected our important files from encryption by ransomware.

Bitdefender also made updates to its Traffic Light browser extension to help ensure users don’t land on harmful websites as well as to help users identify whether or not websites linked to in search results are safe before you click on them. 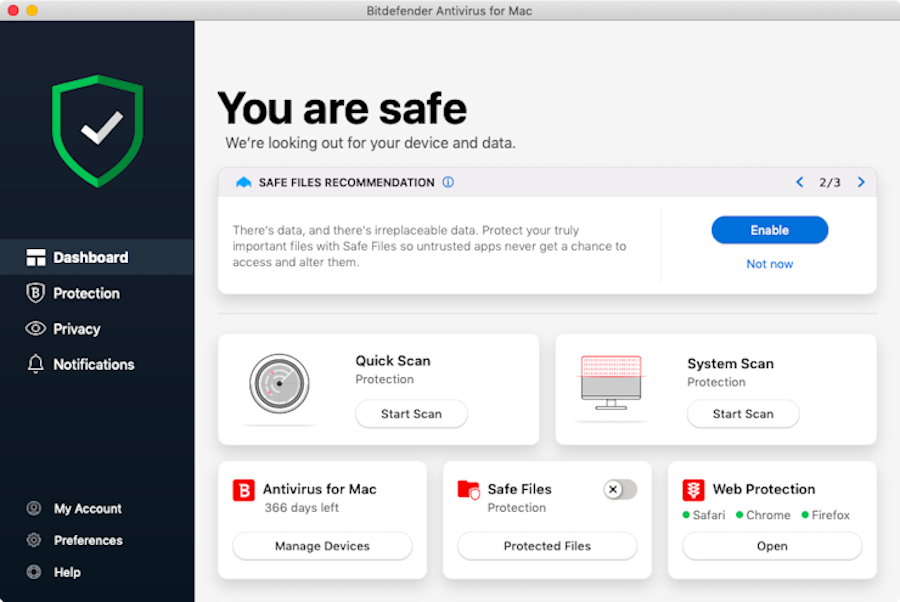 Of course, BAM also comes with the features you have come to expect from good security products, including a feature called Safe Files, which will prevent unauthorized changes to your most important files. You simply add folders to the watch list, and Bitdefender Antivirus for Mac guards the files stored in them against ransomware and other malware. Only applications you explicitly trust are allowed to access your Safe Files. There’s also new feature that’s been introduced called Anti-tracker. The Anti-tracker extension blocks trackers that collect your data and it allows you to view and manage this information on each website you visit, keeping your browsing data private and enhancing performance by loading webpages faster.

Another great feature in BAM is its ability to detect cross-platform malware. What’s the benefit of that you ask? While your Mac may be safe from malicious content designed for Windows you want to make sure you don’t pick it up and pass it on to PC users. Bitdefender Antivirus for Mac detects and removes both malware targeting macOS and threats made for Windows, so you always know the files you send to others are clean. That’s super nifty and awesome!

The latest version of Bitdefender Antivirus for Mac offers top notch protection capabilities. In our tests as well as according to the latest Mac AV security tests at AV Comparatives, which is an independent third-party service that tests and scores anti-virus software’s effectiveness and performance, we found that BAM was able to detect and protect against every piece of Mac malware we threw at it. That’s a very good sign.

In terms how BAM will affect your Mac’s performance, you’ll be happy to know that the team over at Bitdefender has worked extremely hard to keep your Mac humming along even when its software is installed. In our experience with BAM, launching applications remained fast (both the first time and subsequent launches), copying files, archiving/unarchiving files, playing movies, music, and games, all were not noticeably impacted by having the product installed.

The only place we noticed a slight performance hit was when we had the Bitdefender VPN enabled and were browsing the web. As with any VPN, you should expect some amount of latency so it’s not a complete surprise that this happened in our testing. That being said, you aren’t required to use the Bitdefender VPN, it’s an optional feature.

Bitdefender Antivirus for Mac is a wonderful solution to keep your Mac safe and secure, especially as new Mac threats are emerging all the time. As Mac’s become more popular, it’s inevitable that we will continue to see more and more threats targeting them. I’d definitely recommend giving Bitdefender Antivirus for Mac a download, I think you’ll be impressed by its protection capabilities as well as its solid performance. And really, better safe than sorry, right?

The company offers a free 30-day trial of the product and after that a one year license will run you as little as $29.99 for the first year.

Levo II review: does it live up to its high promise?

Which is best: SEO vs AdWords?