Will Newspapers Be Able To Survive The Economic Downturn?

One of the common topics these days, especially across political blogs, is whether or not the newspaper industry will survive its current troubles (and whether or not it deserves to). I think everyone has heard a thousand times since last year how much the news industry is struggling, how no-one reads anymore, and how the internet is making everyone ADD. But what’s actually going on inside the industry?

Truth be told, things are fairly bad on average, but the spread of the troubles is very stilted. Even with how much papers like the New York Times are fretting, they still stand a good chance to weather the recession well. The trouble is with smaller news papers, as illustrated by this helpful graphic from the New York Times in early March (the article was free to access by the way, irony?). 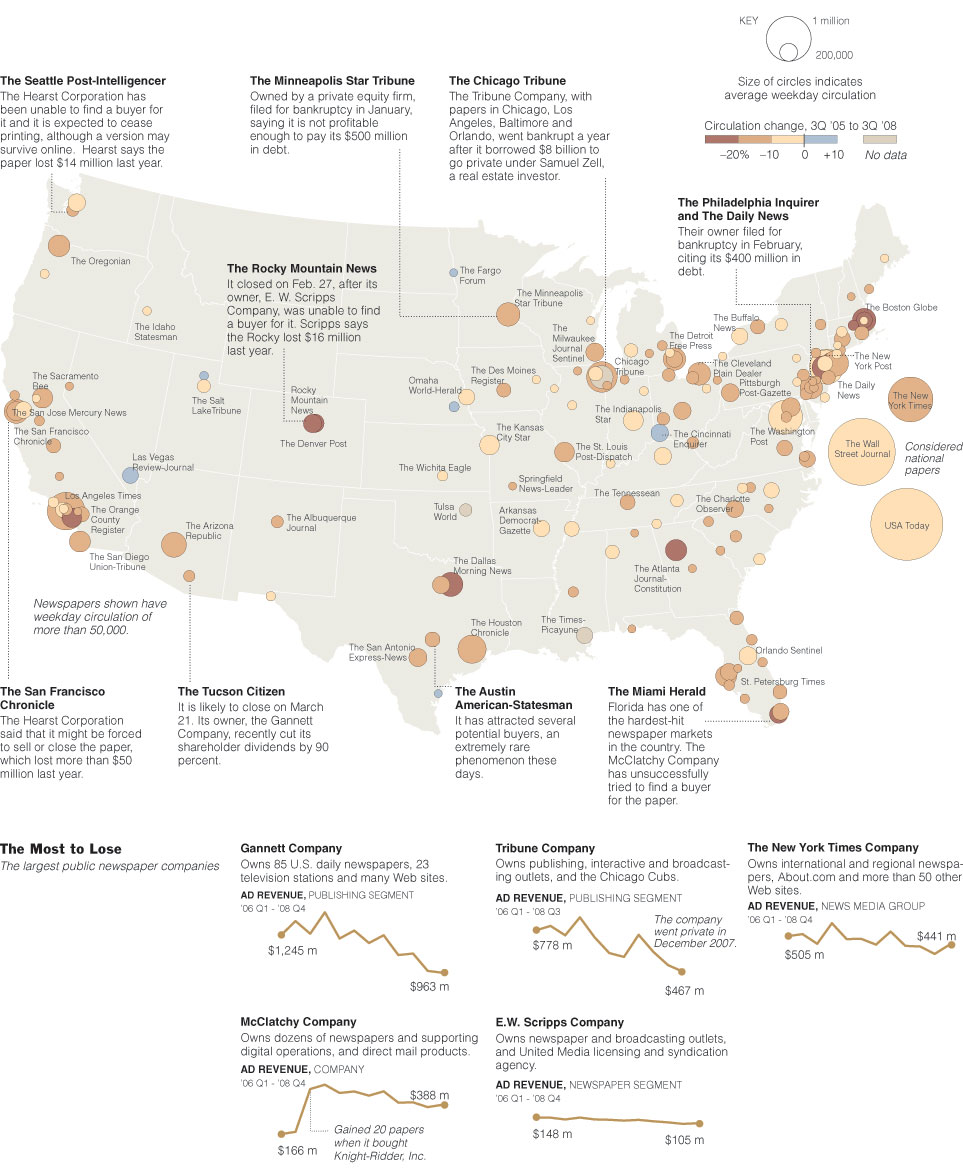 A lot of these newspapers were only barely making a profit before the bust. The current economic crisis has only revealed the underlying problems in the mainstream news industry. Two important points need to be established though:

That still doesn’t address what the long-term prospects are for the industry, or what they’re doing about it. The New York Times is refinancing it’s debt, so it should be alright, and while many (including myself) have lamented Rupert Murdoch’s takeover of The Wall Street Journal, one thing we can be sure of is that he’ll bring in outside money to keep it afloat if anything should happen, keeping it alive for now. Still, those only deal with the now, and it remains that readership is turning more and more towards online news sources, and exclusively online. I, for one, never pick up a physical newspaper anymore, and rarely a magazine. Hell, I don’t even watch cable news, and there are more and more people like me every day. That scares the pants of editors everywhere.

Where do we turn? What is this online news source? I think you all know: news aggregators! Blogs and sites like The Huffington Post are increasingly becoming important parts of the info stream. That doesn’t mean people don’t go to The New York Times website. Many people turn from the physical edition of papers to the online edition, when available. The only problem is, all of these things are free.

Websites like that of the Financial Times have tried to fight this by erecting very, very irritating pay walls. The thing is, it doesn’t seem like this really solves the problem. Yes, it solves the problem somewhat for major news sources like the Financial Times, news sources that get viewed and linked constantly, but this strategy might actually kill the smaller news paper sites.

Just from personal experience, I can say that I have enough trouble dealing with the concept that I should abruptly stop to give my money, even on a news site I frequently view articles from. How can some site expect me to sign up for even a single week, just to view the only article I will probably ever read from it? The open linking across the net has made us used to just flowing through articles, directly to the sources, and on and on. Anything that breaks this instantly becomes and irritant at best, and something to be fought at worst. Some sites have tried to solve this by creating a micro-payment system, but they are largely under-developed and ridiculously priced, not to mention inconstant – many times I’ve been asked at The New York Times’ website to sign up in order to view an article, just to go to the main page and search for the article myself, reading it for free.

Ultimately, it isn’t even as simple as finding a way to monetize online news. The newspaper industry has been cutting back for a while now, resorting more and more to companies like Reuters to do their reporting for them. This has cut the quality of the coverage in newspapers quite obviously, and this includes The New York Times. Many people who read news blogs exclusively do so with a sort of militancy, and this again, includes me. The fact is, if their good is news, and their good sucks, why would we want to buy it?

But I’m a bit ahead of myself. I haven’t even gotten to what structures could possibly replace the new model. That will be next.

Eric Massengill is a tech enthusiast with a real passion for business and gaming.

Requests For Link Exchanges Are So 10 Years Ago