VR is the next big thing in technology. Everyone, from doctors and social activists to gamers and thrill seekers, is seeing huge potential in it. VR technology promises to bring an entirely new category of experience into our digital lives. As with TV, Radio, and personal computers, VR is poised to become a standard technology we use all the time.

Trouble is, unlike most types of tech, it’s very hard to get an idea of what using a VR headset is like without using one yourself. We wanted to get you as close as possible, so we tested out an HTC Vive, one of the major VR headsets scheduled for release this year.

In short, we were totally amazed.

Just to be clear, one thing that was obvious to us from the beginning is that the HTC Vive is not a mass market consumer product. Like most first generations of pioneering technology, the HTC Vive is really designed for enthusiasts and early adopters.

Put another way, Steve Wozniak would love it; Steve Jobs would hate it.

But there is a definite wow factor here. The Vive creates an immersive and responsive virtual world that’s quite unlike anything else we’ve experienced. Of course, before you get to that point, you’ve got to set it up. 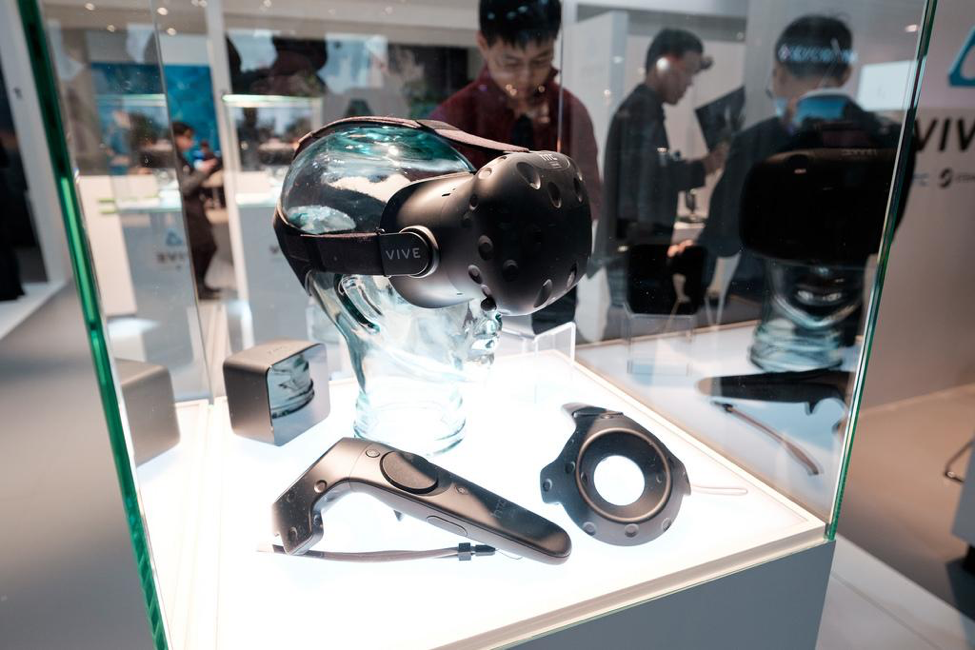 Setting up the HTC Vive

Even someone who’s grown up using all kinds of technology might be a bit overwhelmed when opening the box for the first time. The sheer number of cables and components is a bit shocking: Our words were “What are all these things?” That brings us to the first challenge of setup: finding a suitable room.

To use the HTC Vive, you need a large room free of obstacles. We managed to adapt part of our office for the purpose, though this requires some modifications. Two sensors need to be placed high above the ground. While one of these found a nice spot on a bookshelf, the other required us drilling into a wall to ensure it was at the right height and close enough to a power outlet.

Needless to say, figuring this part out took a little while. Exactly how long? Here’s a breakdown:

So, in our experience, it was about five and a half hours between opening the box and finally using it. We felt a bit like parents who get stuck setting up new toys on Christmas Day. But eventually we did get everything up and running.

Unsurprisingly, there was a definite learning curve. Being immersed in a full VR world for the first time was quite unlike anything any of us had experienced (minus the odd video game-inspired dream).

In fact, it was quite surreal. Each of us found it easy to forget where we were, to lose ourselves in the experience (up to and including stubbing a toe on a couch leg). Still, the feeling was intense enough to make suddenly hearing a colleague’s voice in a space where you were seeing something else entirely quite a shock.

Besides the feel of using the system, each of the components performed well. The hand sensors, head tracking, and overall headset performance were all solid, with no real complaints on our end.

A couple of minor issues got our attention after more use. First, moving your eyes around could make it difficult to get a really clear picture. Adding to this was the difficulty in getting used to turning your entire head in order to look in a different direction, instead of being able to rely on your peripheral vision. Still, these issues weren’t enough to significantly detract from the overall experience.

From our perspective, the HTC Vive and the broader trend of VR technology are far from overhyped. This experience was something entirely new for us and something we’re excited to see continue to develop. That said, despite the short list of hiccups in this first generation, this product seems pretty well polished, considering that this is the its first commercial model.

Looking at the HTC Vive and thinking about the first generation of products like cell phones and MP3 players, it’s incredibly exciting to think about where this technology might take us in the future. We can hardly wait.

Of course if you’ve got a bit of saving to do before you get your hands on an HTC Vive, there are plenty of other VR options out there.

Eric is a historian by training who’s been interested in U.S. small businesses since working at the House Committee on Small Business in 2006. He loves technology and is interested in VR and often

How Technology is Helping Us Find Better Health Care Options

5 Reasons to Travel to Grow Your Business