OWC is a company that most Apple fans know about–they make products specifically for Macs, including memory, solid state drives, and what we’ll be talking about today: docks. This isn’t a new area for OWC, they have manufactured previous versions of the product I’m about to review, but this year’s model, the OWC Thunderbolt 3 dock may end up getting a bit more attention than previous year’s models. Why is that? Because of the limited port selection on the late 2016 MacBook Pros.

You may recall when Apple announced the late 2016 MacBook Pro, the computer only had one type of port in it: Thunderbolt 3. This turned into somewhat of a brouhaha amongst geeks who wanted to be able to plug in legacy devices. Of course, Apple is selling adapters so you can take your old USB-A type device and plug it into your MacBook Pro, but that still hasn’t sat well with some folks. Nonetheless, OWC is here to try and save the day with their brand new Thunderbolt 3 dock.

I have my late 2016 MacBook Pro in clamshell mode on my desk and I been successfully using my LG UltraFine 5K display connected to the OWC dock. Prior to getting the dock, I had the display connected directly to the computer, along with a Thunderbolt 2 device and a couple of USB devices via adapters which resulted in not having any additional Thunderbolt 3 ports available on the computer. The OWC dock has solved that issue for me by allowing me to free up ports for use by other devices while still being able to accommodate the existing devices. 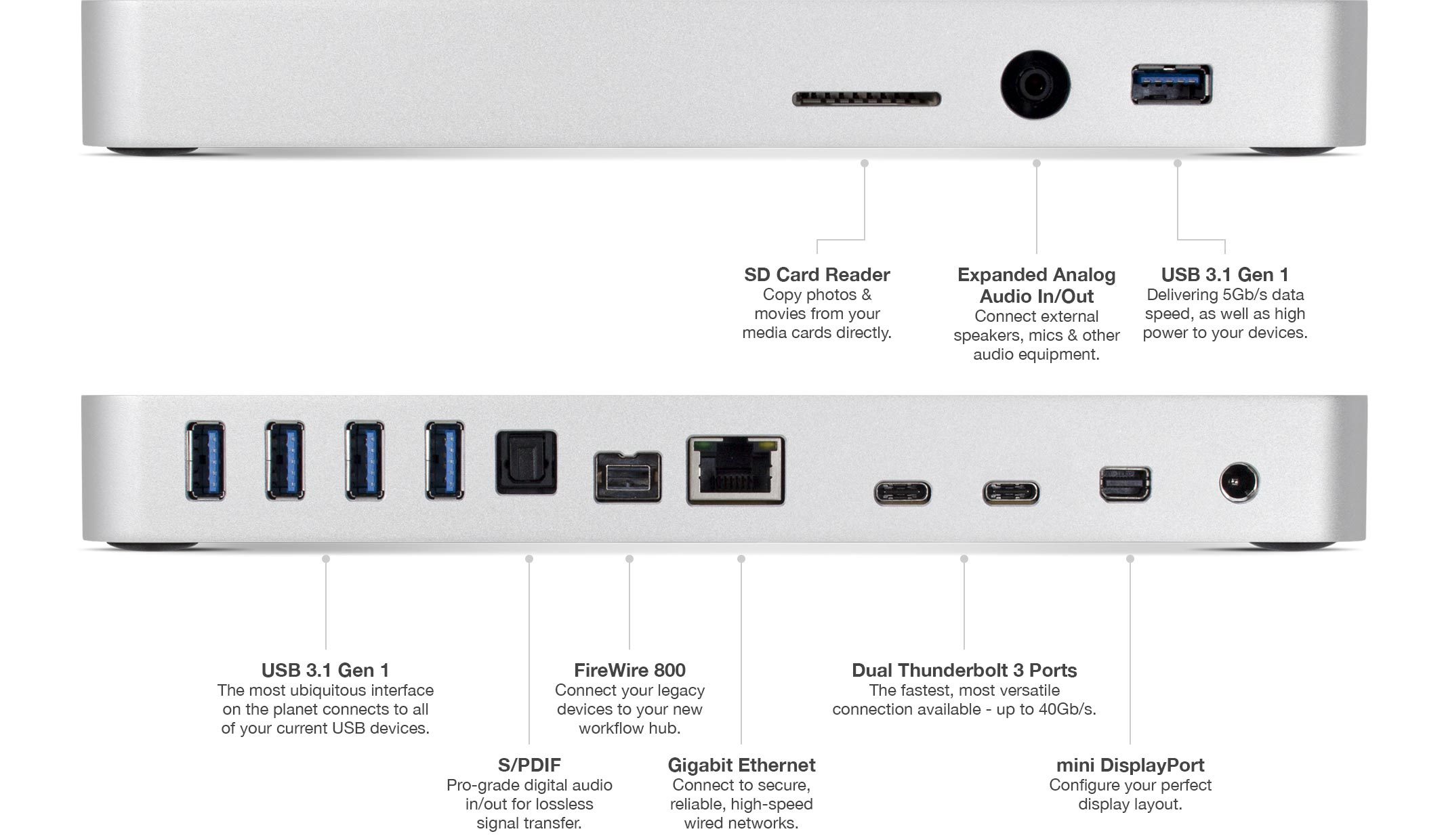 There are also five USB-A 3.1 Gen 1 ports, making up for the absence of any USB-A ports on the new MacBook Pro itself. What’s even nicer is that two (2) of these ports can also fast-charge an iPad and iPhone. There is one fast-charge port on the back and one on the front. Also found on the back of the dock is a Gigabit Ethernet port for those who prefer a hardwired connection, a S/PDIF optical audio output, and a FireWire 800 port if you have some old [Mac] accessories that you just can’t live without–hey, now I can use my Canon Vixia HD camera and easily get video off of it!

Moving back to the front the device, in addition to the fast-charging USB 3.1 Gen 1 port, you will also find a SD card reader for getting your photos from your camera to your Mac (again making up for the removal of the SD card slot on the new MacBook Pros) as well as a 3.5mm jack for headphones or mic input.

The ability to streamline your setup is always nice, especially if your setup is built around a docked laptop. Everyone wants to be able to unplug and go with ease, but when you have multiple devices (and adapters) connected to a computer it can really make unplugging and going a pain or at least a bigger pain than it should be. Ideally, it would be incredible to have a single cable to unplug from your docked laptop and go on your merry way. And to be fair, if you purchase this dock, that is totally a possibility for some people. Sadly, not for me, but for a majority of people I think it’s totally do-able.

The OWC Thunderbolt 3 Dock is priced at $299, is available in silver and space gray (as you can see from the picture above: mine is space gray), and comes bundled with a power supply and a 0.5m Thunderbolt 3 cable to connect to your MacBook Pro. The dock is expected to start shipping soon (likely this summer) and is available for pre-order now.

How to reach your target audience more effectively