Pretty Peachy: All About The Peach App

“Are you on 🍑?” Were the words I woke up to today. I wasn’t, but that was soon rectified. I searched the App Store with the peach symbol before realising that wasn’t going to work and typed “peach”. I had no idea what the app was about, I just downloaded. I ASSumed it had something to do with emojis — the peach emoji being particularly notorious (who knows why? 😉). And I was right — emojis play a big part of the design, but it’s also so much more.

Peach is a brand new social-networking app on iOS, with an Android version in-the-making. Made by Vine co-founder Dom Hofmann, it’s described as “a fun, simple way to keep up with friends and be yourself”. It came out in the US on Friday the 8th of January — much to the joy of those ending their work week. Although it’s been promoted for friends, I imagine it will also be used for professional networking — like as an extension of Twitter. Some brands have already jumped on board as well. Many people are openly sharing their usernames online.

Peach is a fun and simple way to keep up with friends and be yourself.

Before you continue reading, if you haven’t already, I recommend you go and download the app (if you have an iPhone)! The features are best discovered by experiencing them yourself! They have a great onboarding experience and it’s really easy to understand straight away.

You have your own profile on Peach. At the bottom, you can ‘write something’. You can activate ‘Magic Words’ (see next section). There’s also a camera icon (📷) you can tap which allows you to add photos from your camera roll or take a new one — you can even create a short looping video or GIF (a Looping Photobooth).

Using the Magic Word ‘draw’ in the app produces a canvas to draw with your finger. You don’t have any customisation options like colour or thickness of the stroke, although you can undo. You can only draw in a thin black stroke. I think this is a good restriction to make it quicker and less cluttered. I think the style of drawing will also become recognisable as ‘oh, that’s a Peach drawing’. I’ve seen a few drawings on the app so far, and it’s a chance for budding Peach artists to really shine.

I really enjoy the ‘shout’ Magic Word. You can say something in big letters (and of course, you can include emojis also). You can choose a colourful saturated background (or just black or white), change your text size by pinching, make text italics by tapping and hold down to add an image to the background. I really like the style of these images and the text is automatically centred so you don’t have to worry about having equal spacing around it — which I like. The text is also nice and bold and stands out. When posted elsewhere, these ‘shouts’ will end up being recognisable as ‘oh, that’s a Peach shout’. See some I created below. 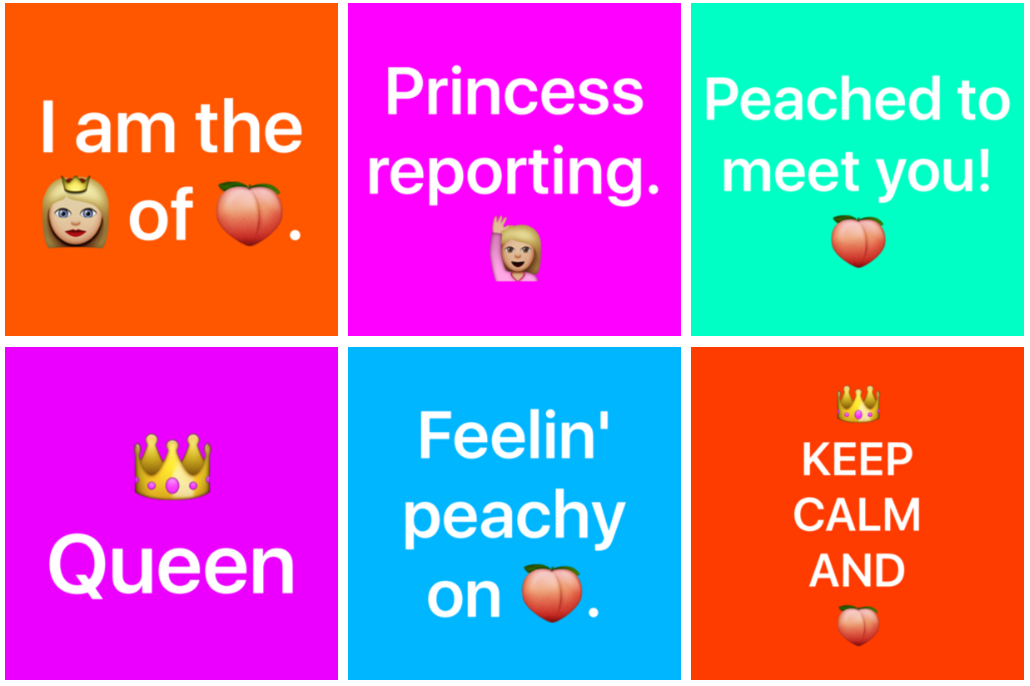 There is a little heart (💟) in the top right of your profile you can tap to view your activity which includes comments, likes, mentions, and what I’ll call actions (like when someone waves at you — see more below). I don’t think it includes friend requests or approvals, for those you get an app banner alert with a vibration.

When you scroll to the bottom of someone’s profile you can do an action such as wave to them. You can also do this as a reply from your Activity. It’s kind of similar to a Facebook poke, only updated for today to include more actions. The full list of things you can currently do include:

You will have to use your imagination for what they all mean. I can tell you though, it’s not nice being hissed at. 😢 However, I’ve received a marriage proposal (when someone put a ring on me), quite a bit of cake and some kisses, so it’s all good. LOL! I think a wink would be another great addition, but limiting the choices is probably a good move. Otherwise, we’d have too many emoji contenders!

I was curious to whether you could add KIMOJIs to the app, especially the peaches and cream one (who wasn’t reminded of that when they downloaded this app). Apparently you can, although as they stretch to the full size of the screen — they don’t look too good.

What’s it been compared to?

Peach has been compared to plenty of other apps from Path to Slack to Twitter to Snapchat to Ello to Yo to Draw Something.

Best I can tell, Peach is just a modern Path.

@dlerner @jessysaurusrex I mean it twitter meets slack meets Ello. and if I'm right, we'll all be bored by Monday

Along with the app is a new verb: peach! Similar to ‘tweet’ on Twitter, we can ‘peach’ each other on Peach. The plural of peach would be peaches. We also have the other tenses peaching and peached. People on Peach are called Peaches (not Peachers as some have assumed — I’m looking to the official Peach Twitter account for reference).

Peach me that TPS report.

Some other words you will get used to include: waved, caked, 100’d, booped, quarantined and hissed.

I’ve had the app for less than 24 hours, and I’m already thinking of other features I would like to have. Do you have any suggestions? Leave them in a note or a comment!

As Matthew Hussey identified in his article on Peach, “It definitely seems to have piqued the interests of the tech press.” People in the tech circle generally jump on these things pretty early to suss them out. I saw it was pretty popular with the Apple community that I follow on Twitter. I’ve included some people I know are genuinely on the app as themselves below.

We also have a whole lot of celebrities on the app. I’m following Taye Diggs (tayediggs) —and regardless of whether this is really him or not, it’s a genuinely funny account (the real Taye Diggs follows me on Twitter so is it too much to believe he could follow me on Peach?). I also promised I’d give a shoutout to Ne-Yo on the app (neyo).

People like to complain about quitting social media or getting over it really fast. Here’s a selection of some satirical posts, plus some other funnies for ya. Keep it mind, it’s only been out for 1 day at the time of publication.

Does anyone still use Peach? It seems so 2pm to me.

I just joined Peach. Did you see that thing on Peach? Only teens use Peach these days. Nobody uses Peach anymore. Oh my god, remember Peach?

Whatever, Peach was so earlier tonight. It's over now.

Remember Peach? Lol. Those were the days.

Does anyone still use Peach?

I joined #Peach because I have to know/do what the kids are doing to stay relevant otherwise I wither away and die right?!?

Me: wtf is peach? @fax_only: it's probably butts

Please do not tell Twitter I'm cheating on it with #Peach

If you’re on Peach, let me know. I’d like to block you everywhere else.

Just a heads up that Mashable will be shifting to an entirely Peach-based publishing strategy.

Why is this app a winner? Because it’s fun.

What sets this app apart from other social networks that pop up and try to gain our attention? Why has this app gone viral so fast? I’d agree with Mat when he says it’s because it’s fun. And he’s not the only one. I’ve seen that word used in more tweets and reviews on the App Store such as: “Fun and simple sharing with your real friends” and “Soooo easy and FUN”.

I have no idea what makes social thingamabum succeed or fail – but the 🔑 difference between Peach and, say, ello is that 🍑 is fun

I love this app. I think it’s really addictive and fun! I already have heaps of friends on the app. I love all the things it can do and this is just the debut! I’ve gotten heaps of engagement there. I’m glad to be an early adopter. I don’t see this just going away. I think it has everything it needs to stick around and become a favourite in many people’s eyes 👀.

You can find me on Peach with the username: heidi_helen.

If you liked this article, I’d appreciate it if you shared my tweet below. Thanks!

Lots of great articles have popped up on Peach. If you feel like doing some more reading check these out.

This article was originally published by Heidi Helen Pilypas on Medium and has been republished with permission.

10 Components Every E-commerce Site Should Build Upon