Is it time to cut the cord and ditch cable?

In 2017, it seems like everyone is hooked on the latest original content from a streaming site, and more people are forgoing watching television week-to-week in favor of binge-watching the whole series over a weekend. These phenomena are only possible with the raise of streaming services, and thusly the desire to cease their cable subscription for more freedom. People all over the country are looking at their cable bills and asking “is it time for me to stop this?”

I would argue that: yes, it is time. 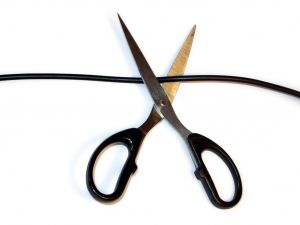 With cable, you probably have hundreds of channels you’ve never even been on. Looking at Xfinity’s channel list as an example, it’s hard to see how anyone has time to take advantage of this wealth of choice. If you watch only a few channels or shows, is it really worth paying for everything? Probably not. You can stream plenty of things on Netflix for around $10, rather than $60 for cable, and without commercial breaks. I wrote down all the shows and channels I watched, and realized I could access most of it for less cost. I urge you to do the same.

Are you streaming things already? This is an obvious one, but thinking back to the television shows or films you watched, (this is where the list is helpful) were they on cable or on a streaming service? If it’s the latter, then cutting the cord is right for you.

If you are watching a lot of television live and want to cut the cord, consider Hulu as the service allows you to watch last night’s television. So, if you avoid spoilers, you can watch The Bachelor after work on Monday commercial-free (if you buy Plus)! You’ll have to avoid the woman in your office who always spoils things, but for $11 a month, it absolutely worth it. This year, Hulu launched Hulu Live TV Online, so for $39 a month, you have access to some cable channels live.

Sling TV and Roku also allow you to have the experience of cable, but with a more à la carte option and the ability to quit at any time. Can you say “Best of Both Worlds?”

If you enjoy watching the Oscars or the presidential debates, or you’re a keen sports fan, then cable probably feels like the best bet.

For political events, they were live streamed on Twitter and Facebook in 2016. So if you’re worried about 2020 already, I’m sure they will be fine. For other live events that aren’t sports, like the Oscars or a reality TV show, the network may livestream from their site, or services like Sling TV will give you the option.

For many years, people kept cable in order to watch sports, but now there are multiple ways to watch. For instance, FuboTV boasts that you can watch MLB, NBA, and NHL Games for $34.99, and you can cancel at any time. If you opt for Sling TV, for $20, you’ll have access to twenty live channels, which includes three ESPN channels, so you’ll be able to access football, college football, baseball, basketball, and more.

Being able to choose what television you pay for is a dream come true, and many people favor cutting the cord to save money. I looked at FiOS by Verizon and Comcast’s Xfinity to see their internet-only packages, and depending on the area you live in, speeds of 150Mbps were $80 and $50, respectively. When adding television the price goes up to about $120 on Verizon. The streaming services are all under $20, so tailoring what’s best for your home would still see you under $120. Honestly, you’re probably paying for at least one service now, so why waste money on hundreds of channels you don’t need for $40 a month?

Overall, cutting the cord allows you to pick the media you have on demand, can save you money, and allows the freedom to drop a service if you feel you’re not using it to its fullest. So, what are you waiting for? Join us in the cord-free twenty-first century.

Why buying social media followers is a bad idea

You can now buy underwear that shields your junk from radiation. ‘Nuff said.