The future of cryptocurrency mining: is it profitable?

Cryptocurrency mining, simply put, is the process using which virgin cryptocurrencies are generated. The process involves making use of processing power to solve complex mathematical problems – which results in solving of a block on the blockchain and the block rewards are given to the miners in form of cryptocurrencies.

Interestingly, when cryptocurrencies first burst onto the scene, there was no such word as ‘mining.’ The words which were used back then were ‘forging’ or ‘minting.’ However, with time, internet slang caught on and the process became ‘mining’. Mining is an analogy often used because cryptocurrencies such as Bitcoin are compared to gold – as they are finite in number and have to be ‘mined’ to be extracted.

Cryptocurrency miners also help verify transactions – thereby ensuring that the flow of funds over the blockchain remains smooth. Hence, miners and the process of mining is an important part of the cryptocurrency ecosystem.

Mining can be done using various processing equipment depending on the kind of currency which is being mined and the mining algorithm and protocols that they follow. Currencies such as Ethereum and Monero can be mined using GPUs but the same is not possible for Bitcoins as only ASIC devices can generate enough processing power to mine it profitably.

Over the years, there have been a number of problems which affect cryptocurrency miners and the mining activity. Let us take a closer look at these problems:

The biggest challenge to cryptocurrency mining is perhaps that of the unstable nature of cryptocurrency prices. Bitcoin prices, for instance, went from $19,500 to $6,500 over a period of four months. This price instability can be a major factor in discouraging miners from proceeding with the mining activity as this price instability can lead to major losses for them as they cannot plan a proper income in advance.

Another major problem that is faced by cryptocurrency miners is that the cost of the equipment is too high. ASIC devices run into thousands of dollars – and the cost of GPUs too, is on the rise. This rising cost of GPUs hurts not only the miners but also the community of gamers who have to pay a higher price for these graphic cards. Also, a mining rig often contains of multiple ASICs or multiple graphic cards – and the cost of all these equipments put together can be too high at times.

Technology evolves at a rapid pace – and same is the case with cryptocurrency mining equipment. These devices tend to get obsolete quickly as newer devices which can mine with a greater efficiency and greater power come out at frequent intervals. Every six-seven months, a new mining device comes out – which can outperform all older devices. While this doesn’t necessarily act as a drawback – but there comes a time when you will have to upgrade, because mining algorithm is such that it keeps increasing the difficulty at regular periods of time, which is often a hefty investment.

Sometimes, government regulations too, can act against the favor of miners. Governments of some nations such as Germany has introduced laws which are miner friendly and they keep mining tax-free. However, nations such as the US will even tax the income generated by mining operations. China has been imposing strict laws on miners – even limiting their power supply – hence government regulations play a big role for miners.

Another major, major issue faced by cryptocurrency miners is that of electricity consumption. Mining requires a high processing power – which requires consumption of a high amount of electricity. Moreover, this high volume of processing also leads to generation of heat. Devices need to be kept cool in order to keep the mining operations going. Hence the electric requirements are too high and act as an additional cost.

The Future of Cryptocurrency Mining 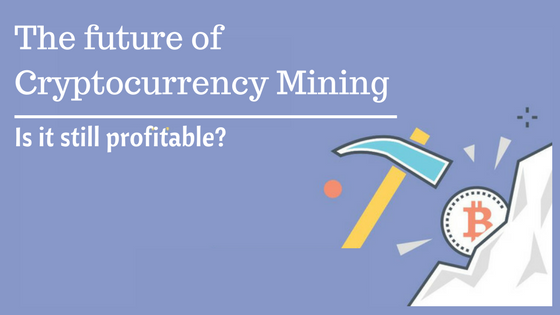 After looking at all the problems which are faced by cryptocurrency miners, one might wonder if it is still advisable to mine for cryptocurrencies in 2018. The answer to this question is – yes, absolutely. Mining as a business operation is quite risky. However, the rewards too, are lucrative. In 2017, mining operations rewarded you with the same number of currencies as they do today – but the price of those currencies was lower than what it is now.

The best advise that any aspiring miner can get is to calculate the risk vs rewards situation before they begin mining. Cryptocurrency mining calculators can help you calculate the total cost of the mining activity (including factors such as electricity cost, the hash rate, difficulty, pool fees – etc.

Basically, the advantage that cryptocurrency mining calculators have is that they allow you to be forewarned about the cost that it would involve and the time that it would take for you to break even and start making profits. If both of these verticals feel appropriate to you, you should totally begin mining for cryptocurrencies.

Prince is freelance marketing analyst and blogger. While not working, you can find him in gym or giving random health advises to his colleagues which no one agrees on. If you too want some of his adv