When their high-tech phones don’t work as expected, some people make jokes and say things like, “Smartphone? It seems more like a dumb phone to me!” Some individuals also bring up how their phones have so many features, and they never use all of them.

A Brooklyn-based startup called Light capitalized on the idea that perhaps people don’t need phones that are so advanced they’re like computers that fit in the palm of a hand. The company unveiled its first straightforward phone in 2015 on Kickstarter. That version could only make and receive calls.

It wasn’t meant to replace smartphones, but the company’s founders wanted to make a point that it’s possible for people to reduce their dependence on gadgets and “go light” by regularly using a phone that was much more basic than all other phones on the market.

People can now pledge on Indiegogo to get the new Light Phone 2. The project’s goal was raising $250,000, but the total is now over $724,000 and rising. You can buy the Light Phone 2 for $250, and there are also sets for couples, families and teams that include more than one phone.

This mode is similar to the original option but does a few more things. Besides making calls, it can wake you up in the morning or send text messages. This version also has an e-ink screen that shows black text on a white matte screen for easy reading at a glance.

Compared to the Android and iOS operating systems, the platform for the Light Phone 2 is extremely simple. The phone’s creators mentioned whereas most operating systems add features and thereby become more complex with every update, the Light Phone 2 remains low-tech. It also has physical buttons on the side of the phone that you press to scroll up and down the menu. 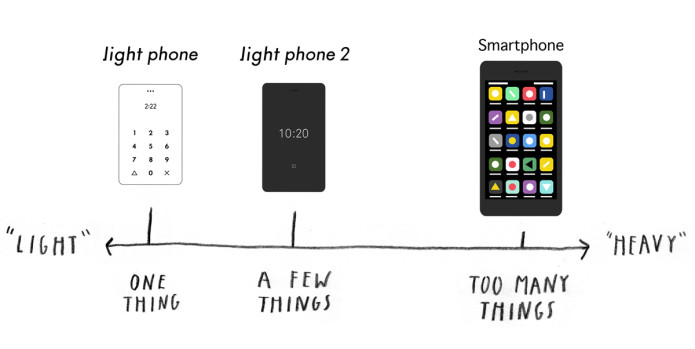 Is Smartphone Addiction a Real Thing?

Many people believe it’s possible to get hooked on smartphones and say the number of apps available is partially to blame. There are apps to do almost everything and so many of them available that people often don’t use or even open the apps they have.

Plus, individuals often use phones throughout most of their workdays, such as if they depend on specialized dialing platforms for sales calls or other types of contact with clients. The practice of using the phone at work has been common for a while, but something that’s changed due to the popularity of smartphones is the way people often constantly stay on the phone during downtime, too.

In fact, various scientific studies point to characteristics that suggest people are addicted to smartphones. Sometimes they even claim to feel phantom vibrations from the device.

Dr. Larry Rosen, Ph.D, a psychology researcher associated with California State University, Dominguez Hills, has spent three decades studying over 50,000 people from around the world to see how technology impacts them. He mentions how on average, a person checks a phone 60 times daily and spends 220 minutes using it.

Dr. Rosen says an addiction to technology is like any other kind of addictive behavior, meaning problems can result when people find they need more of the activity to feel satisfied. When addiction becomes severe, it can harm relationships and lead to job loss, among other serious consequences.

He believes that technological addictions are valid and says it’s not correct to use the terms “addiction” and “obsession” interchangeably because they aren’t the same. Whereas obsession is an anxiety-based disorder that causes people to do activities to relieve unpleasant feelings, people who are addicted do things to experience pleasure.

Others have weighed in and admitted they aren’t universally on board with the idea of being addicted to smartphones. They point out how people can control their smartphone usage by deactivating apps that send push notifications, or parents can restrict how much their kids have access to the devices.

Whether the Light Phone 2 curbs your smartphone dependence is probably largely dependent on how you interact with smartphones now. If you’re an app addict, using the Light Phone 2 would almost certainly help because it doesn’t give access to applications at all.

There are also other ways to stop using your device as much. You could lock your smartphone in a safe or a drawer to keep it out of sight, which could potentially lead to you not thinking about it. Alternatively, consider setting timers and basing your usage on those segments of minutes.

If the Light Phone 2 becomes successful, it may make manufacturers realize there’s a niche market for “dumb phones.” However, it’s not likely the majority of people would ever go back to using stripped-down devices because we’re already too used to them.