While on iTunes (and pretty much industry wide) music offerings have been DRM (Digital Rights Management) free since 2009, the same can’t be said for videos available for purchase or rent via iTunes. Every purchased or rented movie or TV show on iTunes is wrapped in DRM, meaning once you buy that video from iTunes you’re limited in terms of where you can play it (e.g. via iTunes or Apple TV, for example) and it also makes it very difficult to share that video with another person (though I do understand why that should be the case). Nonetheless, today, I’m going to share with you a piece of software for both Mac and Windows that lets you turn DRM video files purchased or rented via iTunes into non-DRM files.

TunesKit DRM Media Converter retails for $44.95 [Mac | Windows], which isn’t necessarily cheap but could certainly be worth the price if you’ve been searching for an easy, functional DRM removal tool. When you launch TunesKit it will also launch iTunes, so if you’ve already got iTunes running, it’ll ask you to relaunch it.

Once TunesKit is launched, it’s incredibly easy to strip the DRM out of whatever video files you’ve downloaded from iTunes. That includes rentals, too, essentially acting as a digital version of those old VHS duping machines that let people keep copies of movies they’d rented from Blockbuster. Doing this might be pretty dubious in terms of living up to your end of iTunes’ User Agreement, so let your conscience be your guide there.

Even without the rental-copying feature, there are plenty of practical, ethical advantages that come with removing DRM. For starters, if you use iTunes on a Windows PC and otherwise stick with Android devices, TunesKit will allow you to watch the videos you buy through iTunes (which may only be available on iTunes, depending on the content) on whatever device you want, as long as it can support the MP4 file format. That means you won’t be stuck watching those videos in iTunes, either. If you prefer VLC or even Windows Media Player, now those are options. 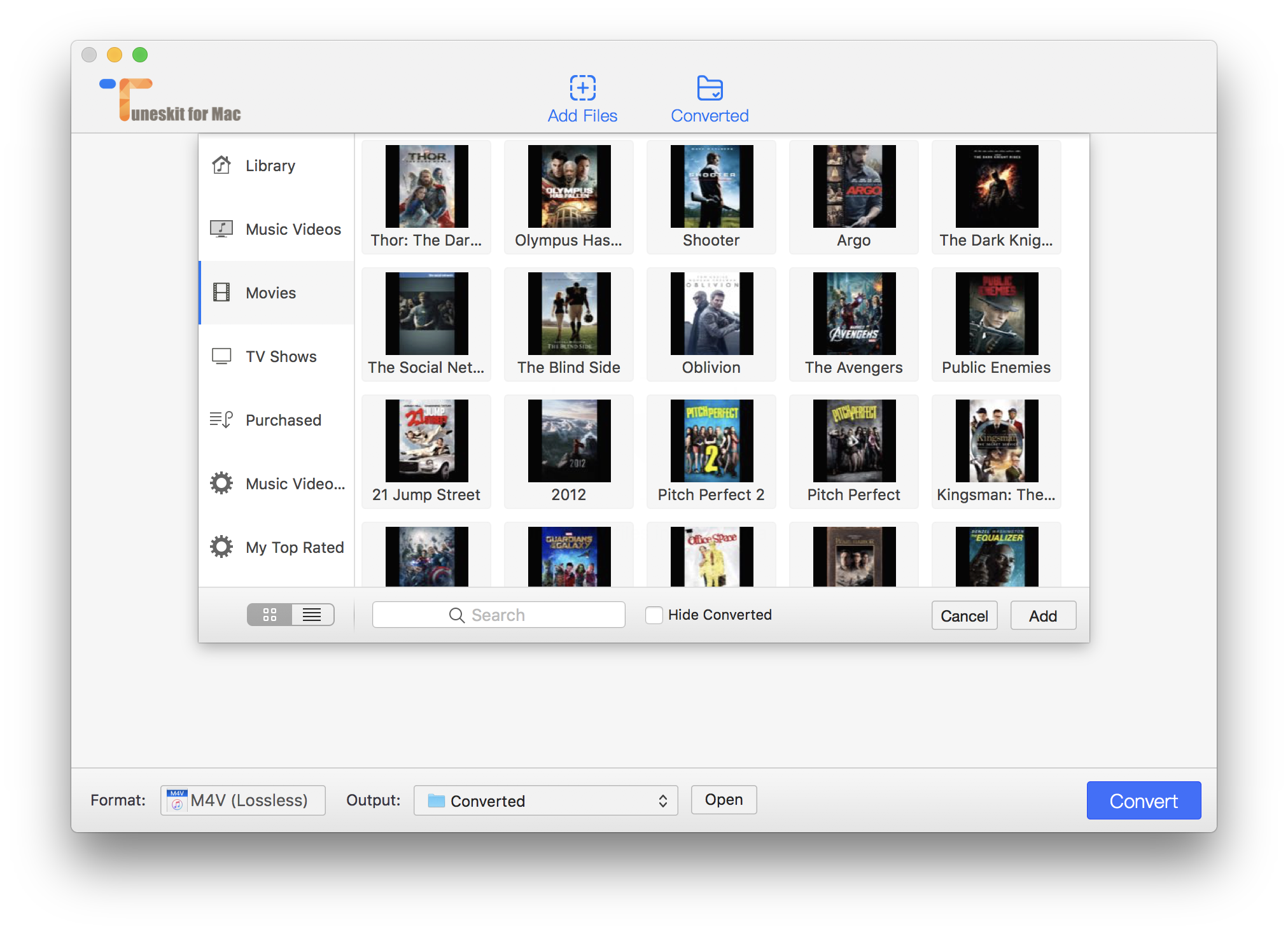 Adding the videos you want to turn DRM-free is super simple. Just click the Add Files button and TunesKit will bring up a window showing all of your iTunes video content, including purchases and rentals. Then all you need to do is select the ones you want to convert and you’re off to the races.

As an experiment, I rented the Fall Out Boy Live DVD from their Boys of Zummer tour a few years ago and had TunesKit remove the DRM for me–and as it should have, it worked. Flawlessly. The newly created non-DRM video file works perfectly, looks and sounds great. This morning when the rental expired, I fired up my non-DRM version of the video and, yep, it stilled played. I also tried using TunesKit on movies I bought through iTunes, I had it create a non-DRM version of one of my favorites: That Thing You Do! That too, worked just as you would expect.

Speed wise, TunesKit is pretty fast. On the company’s website, they claim they can converted a video up to 30x faster than the duration of the movie. Of course, this also depends on the speed of your computer. In my experience, conversions took around around 10 minutes. Also, worth noting is that the conversions are lossless so you don’t lose any quality.

TunesKit also provides several options/presets for encoding your video. By default, it’s set to lossless MP4, however, you can also use the lossless M4V preset (this is a good one if you use mostly Apple products). That being said, I tried both presets and they’re essentially identically except for the file type. There are other options as you can see as well, which depending upon your use case you may want to explore. I also noticed you can convert a video into just audio with TunesKit–I’m assuming that’s a limited use case (maybe if I wanted to convert my live concert video into just audio), but it’s there nonetheless.

The initial $45 cost to buy a license isn’t too much when you think about the money that you can save by not having to buy multiple copies of media so you can play content on different devices. If iTunes has a sale on Game of Thrones, I should be able to buy it there and then have access to that media on any device, right? TunesKit gives me that opportunity. Would I recommend TunesKit? Absolutely.

How new technology and IoT will affect our website usage

How software can help your business save time and money